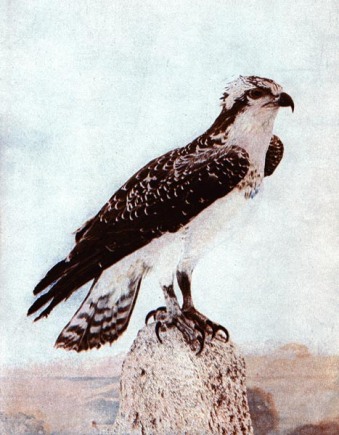 The American Osprey for Birds Illustrated by Color Photography, 1897

Here is the picture of a remarkable bird. We know him better by the name Fish Hawk. He looks much like the Eagle in July “Birds.” The Osprey has no use for Mr. Eagle though.

You know the Bald Eagle or Sea Eagle is very fond of fish. Well, he is not a very good fisherman and from his lofty perch he watches for the Fish Hawk or Osprey. Do you ask why? Well, when he sees a Fish Hawk with his prey, he is sure to chase him and take it from him. It is for this reason that Ospreys dislike the Bald Eagle.

Their food is fish, which as a rule they catch alive.

It must be interesting to watch the Osprey at his fishing. He wings his way slowly over the water, keeping a watch for fish as they appear near the surface.

When he sees one that suits him, he hovers a moment, and then, closing his wings, falls upon the fish.

Sometimes he strikes it with such force that he disappears in the water for a moment. Soon we see him rise from the water with the prey in his claws.

He then flies to some tall tree and if he has not been discovered by his enemy, the Eagle, can have a good meal for his hard work.

Look at his claws; then think of them striking a fish as they must when he plunges from on high.

A gentleman tells of an Osprey that fastened his claws in a fish that was too large for him.

The fish drew him under and nothing more was seen of Mr. Osprey. The same gentleman tells of a fish weighing six pounds that fell from the claws of a Fish Hawk that became frightened by an Eagle.

The Osprey builds his nest much like the Bald Eagle. It is usually found in a tall tree and out of reach.

Like the Eagle, he uses the same nest each year, adding to it. Sometimes it measures five feet high and three feet across. One nest that was found, contained enough sticks, cornstalks, weeds, moss, and the like, to fill a cart, and made a load for a horse to draw. Like the Crows and Blackbirds they prefer to live together in numbers. Over three hundred nests have been found in the trees on a small island.

One thing I want you to remember about the Osprey. They usually remain mated for life.

N interesting bird, “Winged Fisher,” as he has been happily called, is seen in places suited to his habits, throughout temperate North America, particularly about islands and along the seacoast. At Shelter Island, New York, they are exceedingly variable in the choice of a nesting place. On Gardiner’s Island they all build in trees at a distance varying from ten to seventy-five feet from the ground; on Plum Island, where large numbers of them nest, many place their nests on the ground, some being built up to a height of four or five feet while others are simply a few sticks arranged in a circle, and the eggs laid on the bare sand. On Shelter Island they build on the chimneys of houses, and a pair had a nest on the cross-bar of a telegraph pole. Another pair had a nest on a large rock. These were made of coarse sticks and sea weed, anything handy, such as bones, old shoes, straw, etc. A curious nest was found some years ago on the coast of New Jersey. It contained three eggs, and securely imbedded in the loose material of the Osprey’s nest was a nest of the Purple Grackle, containing five eggs, while at the bottom of the Hawk’s nest was a thick, rotten limb, in which was a Tree Swallow’s nest of seven eggs.

In the spring and early autumn this familiar eagle-like bird can be seen hovering over creek, river, and sound. It is recognized by its popular name of Fish-Hawk. Following a school of fish, it dashes from a considerable height to seize its prey with its stout claws. If the fish is small it is at once swallowed, if it is large, (and the Osprey will occasionally secure shad, blue fish, bass, etc., weighing five or six pounds,) the fish is carried to a convenient bluff or tree and torn to bits. The Bald Eagle often robs him of the fish by seizing it, or startling him so that he looses his hold.

The Osprey when fishing makes one of the most breezy, spirited pictures connected with the feeding habits of any of our birds, as often there is a splashing and a struggle under water when the fish grasped is too large or the great talons of the bird gets entangled. He is sometimes carried under and drowned, and large fish have been washed ashore with these birds fastened to them by the claws.

Mrs. Mabel Osgood Wright says: “I found an Osprey’s nest in a crooked oak on Wakeman’s Island in late April, 1893. As I could not get close to the nest (the island is between a network of small creeks, and the flood tides covered the marshes,) I at first thought it was a monstrous crow’s nest, but on returning the second week in May I saw a pair of Osprey coming and going to and fro from the nest. I hoped the birds might return another season, as the nest looked as if it might have been used for two or three years, and was as lop-sided as a poorly made haystack. The great August storm of the same year broke the tree, and the nest fell, making quite a heap upon the ground. Among the debris were sticks of various sizes, dried reeds, two bits of bamboo fishing rod, seaweeds, some old blue mosquito netting, and some rags of fish net, also about half a bushel of salt hay in various stages of decomposition, and malodorous dirt galore.”

It is well-known that Ospreys, if not disturbed, will continue indefinitely to heap rubbish upon their nests till their bulk is very great. Like the Owls they can reverse the rear toe. 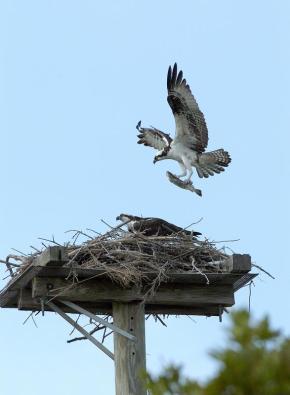 Osprey with Fish by Jim Fenton

And these are they which ye shall have in abomination among the fowls; they shall not be eaten, they are an abomination: the eagle, and the ossifrage, and the ospray, (Leviticus 11:13 KJV)

We have the privilege of seeing Ospreys all the time. On a daily basis we spot them on their platforms that have been put up for them in this area. If they don’t place them there, then you find their nest in trees with bare branches that they can anchor the nest and have a good place to watch for fish.

Ospreys are in the Pandionidae – Ospreys Family and they are one of the Birds of the Bible.
*

Next Article – The Sora Rail