Vol. 2 – 6 The Mountain Bluebird, which is from the Kid’s Section, had some Bluebirds skip out and break their links. They were too pretty to let them get away.

The Birds Illustrated by Color Photography – Revisited has some very interesting information about birds, but written from a young reader’s level. Here is the Mountain Bluebird reblogged with some added information and the Bluebirds back on their posts.

This was written back in 2013. Trust you enjoy this article and links to other Bluebird articles.

N an early number of Birds we presented a picture of the common Bluebird, which has been much admired. The mountain Bluebird, whose beauty is thought to excel that of his cousin, is probably known to few of our readers who live east of the Rocky Mountain region, though he is a common winter sojourner in the western part of Kansas, beginning to arrive there the last of September, and leaving in March and April. The habits of these birds of the central regions are very similar to those of the eastern, but more wary and silent. Even their love song is said to be less loud and musical. It is a rather feeble, plaintive, monotonous warble, and their chirp and twittering notes are weak. They subsist upon the cedar berries, seeds of plants, grasshoppers, beetles, and the like, which they pick up largely upon the ground, and occasionally scratch for among the leaves. During the fall and winter they visit the plains and valleys, and are usually met with in small flocks, until the mating season.

Nests of the Mountain Bluebird have been found in New Mexico and Colorado, from the foothills to near timber line, usually in deserted Woodpecker holes, natural cavities in trees, fissures in the sides of steep rocky cliffs, and, in the settlements, in suitable locations about and in the adobe buildings. In settled portions of the west it nests in the cornice of buildings, under the eaves of porches, in the nooks and corners of barns and outhouses, and in boxes provided for its occupation. Prof. Ridgway found the Rocky Mountain Bluebird nesting in Virginia City, Nevada, in June. The nests were composed almost entirely of dry grass. In some sections, however, the inner bark of the cedar enters largely into their composition. The eggs are usually five, of a pale greenish-blue.

The females of this species are distinguished by a greener blue color and longer wings, and this bird is often called the Arctic Bluebird. It is emphatically a bird of the mountains, its visits to the lower portions of the country being mainly during winter.

Heaped in the hollows of the grove, the autumn leaves lie dead;
They rustle to the eddying gust, and to the rabbits’ tread.
The Robin and the Wren are flown, and from the shrubs the Jay,
And from the wood-top calls the Crow all through the gloomy day.
—Bryant.

Range—Rocky Mountain region, north to Great Slave Lake, south to Mexico, west to the higher mountain ranges along the Pacific.

Nest—Placed in deserted Woodpecker holes, natural cavities of trees, nooks and corners of barns and outhouses; composed of dry grass. 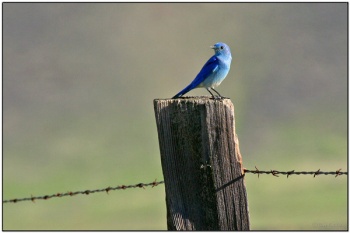 …In the LORD put I my trust: how say ye to my soul, Flee as a bird to your mountain? … If the foundations be destroyed, what can the righteous do? The LORD is in his holy temple, the LORD’S throne is in heaven: his eyes behold, his eyelids try, the children of men. … For the righteous LORD loveth righteousness; his countenance doth behold the upright.
(Psalms 11:1,3,4,7 KJV)

The Mountain Bluebird belongs to the Turdidae – Thrushes Family and as such have Thrush characteristics. Since blue is my favorite color, the bluebirds are some of my favorites. The Lord has used such variety in His coloration, that I am happy that blue was one of them. We have also the Eastern and Western Bluebirds plus the Asian and Philippine Fairy-bluebirds.

The Mountain Bluebird (Sialia currucoides) is a medium-sized bird weighing about 1.1 ounces (30 g) with a length from 6.3–7.9 in (16–20 cm). They have light underbellies and black eyes. Adult males have thin bills that are bright turquoise-blue and somewhat lighter beneath. Adult females have duller blue wings and tail, grey breast, grey crown, throat and back. In fresh fall plumage, the female’s throat and breast are tinged with red-orange; brownish near the flank contrasting with white tail underparts. Call is a thin few; Song is warbled high chur chur.

The mountain bluebird is migratory. Their range varies from Mexico in the winter to as far north as Alaska, throughout the western U.S. and Canada. Northern birds migrate to the southern parts of the range; southern birds are often permanent residents. Some birds may move to lower elevations in winter. They inhabit open rangelands, meadows, generally at elevations above 5,000 feet. Contrary to popular belief, mountain bluebirds are not a species of concern in the United States. The turn around in mountain bluebird numbers is due to the overwhelming efforts of landowners in the West to provide nest boxes for these birds. At one time, mountain bluebird numbers were threatened because of increased agricultural activities destroying habitats.

These birds hover over the ground and fly down to catch insects, also flying from a perch to catch them. They mainly eat insects, over 90%, and berries. They may forage in flocks in winter, when they mainly eat grasshoppers. Mountain bluebirds will come to a platform feeder with live meal worms, berries, or peanuts.

Their breeding habitat is open country across western North America, including mountain areas, as far north as Alaska. They nest in pre-existing cavities or in nest boxes. In remote areas, these birds are less affected by competition for natural nesting locations than other bluebirds. Mountain bluebirds are a monogamous breed. The male can be seen singing from bare branches. The singing takes place right at dawn, just when the sun rises. Females usually build the nests themselves. Eggs: pale blue and unmarked, sometimes white. Clutch Size: 4-5 eggs. Young are naked and helpless at hatching and may have some down. Incubation normally last 14 days and the young will take about 21 days before they leave the nest. Both males and females fiercely protect the nest.

It is the state bird of Idaho and Nevada.

Mountain bluebirds are cavity nesters and can become very partial to a nest box, especially if they have successfully raised a clutch. They may even re-use the same nest, though not always. Providing nest boxes is a great way to observe these beautiful birds. Mountain bluebirds will not abandon a nest if human activity is detected close by or at the nest. Because of this, mountain bluebirds can be easily banded while they are still in the nest. 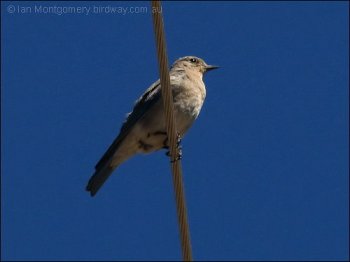 Next Article – The English Sparrow

The Previous Article – The Ornithological Congress

4 thoughts on “Rounded Up Some Bluebirds”