HITE-BACK, Canard Cheval, (New Orleans,) Bull-Neck, and Red-Headed Bull-Neck, are common names of the famous Canvas-Back, which nests from the northern states, northward to Alaska. Its range is throughout nearly all of North America, wintering from the Chesapeake southward to Guatemala.

“The biography of this duck,” says Mabel Osgood Wright, “belongs rather to the cook-book than to a bird list,” even its most learned biographers referring mainly to its “eatable qualities,” Dr. Coues even taking away its character in that respect when he says “there is little reason for squealing in barbaric joy over this over-rated and generally under-done bird; not one person in ten thousand can tell it from any other duck on the table, and only then under the celery circumstances,” referring to the particular flavor of its flesh, when at certain seasons it feeds on vallisneria, or “water celery,” which won its fame. This is really not celery at all, but an eel-grass, not always found through the range of the Canvas-Back. When this is scarce it eats frogs, lizards, tadpoles, fish, etc., so that, says Mrs. Osgood, “a certificate of residence should be sold with every pair, to insure the inspiring flavor.”

The opinion held as to the edible qualities of this species varies greatly in different parts of the country. No where has it so high a reputation as in the vicinity of Chesapeake Bay, where the alleged superiority of its flesh is ascribed to the abundance of “water celery.” That this notion is erroneous is evident from the fact that the same plant grows in far more abundance in the upper Mississippi Valley, where also the Canvas-Back feeds on it. Hence it is highly probable that fashion and imagination, or perhaps a superior style of cooking and serving, play a very important part in the case. In California, however, where the “water celery” does not grow, the Canvas-Back is considered a very inferior bird for the table.

It has been hunted on Chesapeake Bay and its tributaries with such inconsiderate greed that its numbers have been greatly reduced, and many have been driven to more southern waters.

In and about Baltimore, the Canvas-Back, like the famous terrapin, is in as high favor for his culinary excellence, as are the women for beauty and hospitality. To gratify the healthy appetite of the human animal this bird was doubtless sent by a kind Providence, none the less mindful of the creature comforts and necessities of mankind than of the purely aesthetic senses.

Range—North America. Breeds only in the interior, from northwestern states to the Arctic circle; south in winter to Guatemala.

Nest—On the ground, in marshy lakesides.

The Canvas-Back Duck is now the Canvasback (Aythya valisineria). Wikipedia (with editing) says The Canvasback is the largest of the North American diving ducks, that ranges from between 19–22 in (48–56 centimetres) long and weighs approximately 1.90–3.50 lbs (862–1,588 gram), with a wingspan of 31–35 in (79–89 centimetres). The canvasback has a distinctive wedge-shaped head and long graceful neck. The adult male (drake) has a black bill, a chestnut red head and neck, a black breast, a grayish back, black rump, and a blackish brown tail. The drake’s sides, back, and belly are white with fine vermiculation resembling the weave of a canvas, which gave rise to the bird’s common name. The bill is blackish and the legs and feet are bluish-gray. The iris is bright red in the spring, but duller in the winter. The adult female (hen) also has a black bill, a light brown head and neck, grading into a darker brown chest and foreback. The sides, flanks, and back are grayish brown. The bill is blackish and the legs and feet are bluish-gray. Its sloping profile distinguishes it from other ducks.

The breeding habitat of the Canvasback is in North America prairie potholes. The bulky nest is built from vegetation in a marsh and lined with down. Loss of nesting habitat has caused populations to decline. (That and apparently the killing of them per the article.) It prefers to nest over water on permanent prairie marshes surrounded by emergent vegetation, such as cattail and bulrushes, which provide protective cover. Other important breeding areas are the subarctic river deltas in Saskatchewan and the interior of Alaska. 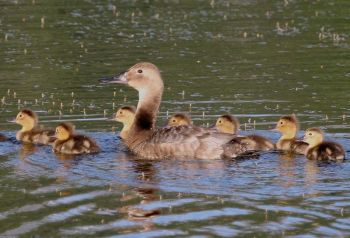 It has a clutch size of approximately 5-11 eggs that are a greenish drab. The chicks are covered in down at hatching and able to leave the nest soon after. The Canvasback sometimes lays its eggs in other Canvasback nests and Redheads often parasitize Canvasback nests.

In the early 1950s it was estimated that there were 225,000 Canvasbacks wintering in the Chesapeake Bay; this represented one-half of the entire North American population. By 1985, there were only 50,000 ducks wintering there, or one-tenth of the population. Canvasbacks were extensively hunted around the turn of the 19th to 20th century, but federal hunting regulations restrict their harvest, so hunting was ruled out as a cause for the decline. Scientists have now concluded that the decline in duck populations was due to the decline in  submerged aquatic vegetation acreage. Today the population has stabilized and is even increasing slightly, although it is nowhere near previous levels.

Next Article – The Wood Duck