Gavest thou the goodly wings unto the peacocks? or wings and feathers unto the ostrich? Which leaveth her eggs in the earth, and warmeth them in dust, And forgetteth that the foot may crush them, or that the wild beast may break them. She is hardened against her young ones, as though they were not hers: her labor is in vain without fear; Because God hath deprived her of wisdom, neither hath he imparted to her understanding. What time she lifteth up herself on high, she scorneth the horse and his rider. (Job 39:13-18) 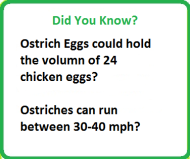 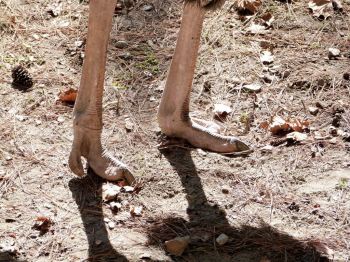 “The ostrich is the largest and heaviest living bird. It is flightless and can not take to the skies. Instead it’s built for running. Its long, thick, and powerful legs can cover great distances without much effort, and its feet have only two toes for greater speed. Ostriches can sprint in short bursts up to 43 miles per hour (70 kilometers per hour), and they can maintain a steady speed of 31 miles per hour (50 kilometers per hour). Just one of an ostrich’s strides can be 10 to 16 feet long. When danger threatens, ostriches can escape pretty easily by running away. They can also defend themselves: they have a 4-inch claw on each foot, and their kick is powerful enough to kill a lion.” (San Diego Zoo)

“If they can’t fly, why do they have wings? For one thing, ostriches hold their wings out to help them balance when they run, especially if they suddenly change direction. Their main use, though, is for displays and courtship, along with the tail feathers. To show dominance, an ostrich holds its head up high and lifts its wings and tail feathers; to show submission, the head, wings, and tail droop down.

During courtship, the black-and-white male uses his dramatic coloring to attract the light brown female. He sinks slowly to the ground, almost like he’s bowing, and begins to wave and shake the feathers of first one wing and then the other while moving his tail up and down. He then gets up and moves toward the female, holding his wings out and stamping as he goes to impress her.” We saw this behavior at the Zoo recently.

Scripture Alphabet of Animals: The Ostrich

Birds of the Bible – Ostrich.

Martha and the Go-Kart Race

Please consider coming on over to Lee's Birdwatching Adventures, where you will find many more birdwatching articles for our regular readers.