NE of the most brilliant and striking of all American birds is the Scarlet Tanager. From its black wings resembling pockets, it is frequently called the “Pocket Bird.” The French call it the “Cardinal.” The female is plain olive-green, and when seen together the pair present a curious example of the prodigality with which mother nature pours out her favors of beauty in the adornment of some of her creatures and seems niggardly in her treatment of others. Still it is only by contrast that we are enabled to appreciate the quality of beauty, which in this case is of the rarest sort. In the January number of Birds we presented the Red Rumped Tanager, a Costa Rica bird, which, however, is inferior in brilliancy to the Scarlet, whose range extends from eastern United States, north to southern Canada, west to the great plains, and south in winter to northern South America. It inhabits woodlands and swampy places. The nesting season begins in the latter part of May, the nest being built in low thick woods or on the skirting of tangled thickets; very often also, in an orchard, on the horizontal limb of a low tree or sapling. It is very flat and loosely made of twigs and fine bark strips and lined with rootlets and fibers of inner bark.

The eggs are from three to five in number, and of a greenish blue, speckled and blotted with brown, chiefly at the larger end.

The disposition of the Scarlet Tanager is retiring, in which respect he differs greatly from the Summer Tanager, which frequents open groves, and often visits towns and cities. A few may be seen in our parks, and now and then children have picked up the bright dead form from the green grass, and wondered what might be its name. Compare it with the Redbird, with which it is often confounded, and the contrast will be striking.

His call is a warble, broken by a pensive call note, sounding like the syllables chip-churr, and he is regarded as a superior musician.

“Passing through an orchard, and seeing one of these young birds that had but lately left the nest, I carried it with me for about half a mile to show it to a friend, and having procured a cage,” says Wilson, “hung it upon one of the large pine trees in the Botanic Garden, within a few feet of the nest of an Orchard Oriole, which also contained young, hoping that the charity and kindness of the Orioles would induce them to supply the cravings of the stranger. But charity with them as with too many of the human race, began and ended at home. The poor orphan was altogether neglected, and as it refused to be fed by me, I was about to return it to the place where I had found it, when, toward the afternoon, a Scarlet Tanager, no doubt its own parent, was seen fluttering around the cage, endeavoring to get in. Finding he could not, he flew off, and soon returned with food in his bill, and continued to feed it until after sunset, taking up his lodgings on the higher branches of the same tree. In the morning, as soon as day broke, he was again seen most actively engaged in the same manner, and, notwithstanding the insolence of the Orioles, he continued his benevolent offices the whole day, roosting at night as before. On the third or fourth day he seemed extremely solicitous for the liberation of his charge, using every expression of distressful anxiety, and every call and invitation that nature had put in his power, for him to come out. This was too much for the feelings of my friend. He procured a ladder, and mounting to the spot where the bird was suspended, opened the cage, took out his prisoner, and restored him to liberty and to his parent, who, with notes of great exultation, accompanied his flight to the woods.”

What could be more beautiful to see than this bird among the green leaves of a tree? It almost seems as though he would kindle the dry limb upon which he perches. This is his holiday dress. He wears it during the nesting season. After the young are reared and the summer months gone, he changes his coat. We then find him dressed in a dull yellowish green—the color of his mate the whole year.

Do you remember another bird family in which the father bird changes his dress each spring and autumn?

The Scarlet Tanager is a solitary bird. He likes the deep woods, and seeks the topmost branches. He likes, too, the thick evergreens. Here he sings through the summer days. We often pass him by for he is hidden by the green leaves above us.

He is sometimes called our “Bird of Paradise.”

Tanagers feed upon winged insects, caterpillars, seeds, and berries. To get these they do not need to be on the ground. For this reason it is seldom we see them there.

Both birds work in building the nest, and both share in caring for the little ones. The nest is not a very pretty one—not pretty enough for so beautiful a bird, I think. It is woven so loosely that if you were standing under it, you could see light through it.

Notice his strong, short beak. Now turn to the picture of the Rose-Breasted Grosbeaks in April Birds. Do you see how much alike they are? They are near relatives.

I hope that you may all have a chance to see a Scarlet Tanager dressed in his richest scarlet and most jetty black. 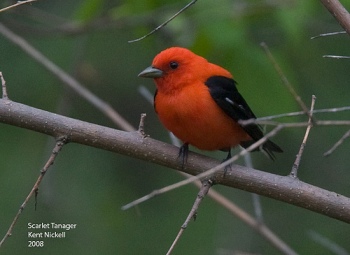 Scarlet Tanagers (Piranga olivacea) find themselves assigned to the Cardinalidae – Grosbeaks, Saltators & Allies Family and not in the Thraupidae – Tanagers and Allies where I would have thought they might be.

The tanagers comprise the bird family Thraupidae, in the order Passeriformes. The family has an American distribution (Cardinalidae). Tanagers are small to medium-sized birds.

There were traditionally about 240 species of tanagers, but the taxonomic treatment of this family’s members is currently in a state of flux. As more of these birds are studied using modern molecular techniques it is expected that some genera may be relocated elsewhere. Already species in the genera Euphonia and Chlorophonia, which were once considered part of the tanager family, are now treated as members of Fringillidae, in their own subfamily (Euphoniinae). Likewise the genera Piranga (which includes the Scarlet Tanager, Summer Tanager, and Western Tanager), Chlorothraupis, and Habia appear to be members of the Cardinal family, and have been reassigned to that family by the AOU.

Adults have pale stout smooth bills. Adult males are bright red with black wings and tail; females are yellowish on the underparts and olive on top, with olive-brown wings and tail. The adult male’s winter plumage is similar to the female’s, but the wings and tail remain darker. Young males briefly show a more complex variegated plumage intermediate between adult males and females. It apparently was such a specimen that was first scientifically described. Hence the older though somewhat confusing specific epithet olivacea (“the olive-colored one”) is used rather than erythromelas (“the red-and-black one”), as had been common throughout the 19th century.

They begin arriving on the breeding grounds in numbers by about May and already start to move south again in mid-summer; by early October they are all on their way south.[3] The bird is an extremely rare vagrant to western Europe.
Scarlet Tanagers are often out of sight, foraging high in trees, sometimes flying out to catch insects in flight. They eat mainly insects and fruit.

These birds do best in the forest interior, where they are less exposed to predators and brood parasitism by the Brown-headed Cowbird. Their nests are typically built on horizontal tree branches. Specifically their numbers are declining in some areas due to habitat fragmentation, but on a global scale tanagers are a plentiful species.

Next Article – The Ruffed Grouse

Previous Article – June and The Birds and Farmers

Learning from the Birds – Overwhelmed