F the children had had the naming of birds we venture to say that it would have been more appropriately done, and “Blackburnian,” as many other names of Warblers, would have had no place in literature. There are about seventy-five well known Warblers, nearly all with common names indicating the most characteristic colors or habits, or partly descriptive of the bird itself. The common names of this beautiful Warbler are Orange-throated Warbler and Hemlock Warbler. Some one has suggested that it should be called the Torch Bird, for “half a dozen of them as they flash about in the pines, raising their wings and jerking their tails, make the darkest shadows seem breaking into little tongues of flame.”

The Orange-throat is only migratory in Illinois, passing through in spring and fall, its summer home being chiefly if not wholly, to the northward, while it passes the winter in Central America and northern South America. It is found in New York and in portions of Massachusetts, frequenting the coniferous forests, and building its nest in bushes or small trees a few feet above the ground. Dr. C. Hart Merriam found a pair of these birds nesting in a grove of large white pines in Lewis County, New York. In the latter part of May the female was observed building, and on the second of June the nest contained four fresh eggs of the Warbler and one of the Cow bird. The nest was saddled on the horizontal limb about eight feet from the ground and about ten feet from the trunk. Nests have been found in pine trees in Southern Michigan at an elevation of forty feet. In all cases the nests are placed high in hemlocks or pines, which are the bird’s favorite resorts. From all accounts the nests of this species are elegantly and compactly made, consisting of a densely woven mass of spruce twigs, soft vegetable down, rootlets, and fine shreds of bark. The lining is often intermixed with horse hairs and feathers. Four eggs of greenish-white or very pale bluish-green, speckled or spotted, have usually been found in the nests.

The autumnal male Warblers resemble the female. They have two white bands instead of one; the black stripes on the side are larger; under parts yellowish; the throat yellowish, passing into purer yellow behind. Few of our birds are more beautiful than the full plumaged male of this lovely bird, whose glowing orange throat renders it a conspicuous object among the budding and blossoming branches of the hemlocks. Chapman says, coming in May, before the woods are fully clad, he seems like some bright plumaged tropical bird who has lost his way and wandered to northern climes. The summer is passed among the higher branches in coniferous forests, and in the early fall the bird returns to surroundings which seem more in keeping with its attire.

Range—Eastern North America; breeds from northern Minnesota and southern Maine northward to Labrador and southward along the Alleghenies to South Carolina; winters in the tropics.

Nest—Of fine twigs and grasses, lined with grasses and tendrils, in coniferous trees, ten to forty feet up.

Beside them the birds of the heavens dwell; they sing among the branches. (Psalms 104:12 ESV)

What a gorgeous beauty the Lord created with this Warbler. Aren’t they just a delight to behold. The male of course is the most colorful. They belong to the Parulidae – New World Warblers Family. A nice photo of a male and female is on Looking back … scroll to the end of the article.

“The Blackburnian Warbler (Setophaga fusca) is a small New World warbler. They breed in eastern North America, from southern Canada, westwards to the southern Canadian Prairies, the Great Lakes region and New England, to North Carolina.

Blackburnian Warblers are migratory, wintering in southern Central America and in South America, and are very rare vagrants to western Europe. These birds were named after Anna Blackburne, an English botanist.

Blackburnian Warblers display dark gray backs and double white wing bars, with yellowish rumps and dark brown crowns. The underparts of these birds are white, and are tinged with yellow and streaked black. The head is strongly patterned in yellow and black, with a flaming-orange throat. It is the only North American warbler with this striking plumage. Other plumages, including the fall male and adult female, are washed-out versions of the summer male, and in particular lack the bright colors and strong head pattern. Basic plumages show weaker yellows and gray in place of black in the breeding male. Blackburnian Warblers’ songs are a simple series of high swi notes, which often ascend in pitch. Their call is a high sip.

WhatBird’s Sound Page for the Blackburnian 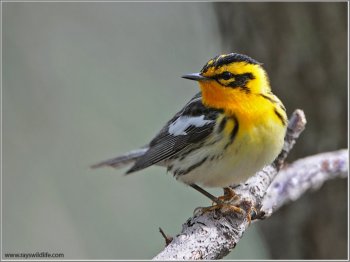 Blackburnian Warblers are solitary during winter and highly territorial on their breeding grounds and do not mix with other passerine species outside of the migratory period. However, during migration, they often join local mixed foraging flocks of species such as chickadees, kinglets and nuthatches. These birds are basically insectivorous, but will include berries in their diets in wintertime. They usually forage by searching for insects or spiders in treetops. The breeding habitats of these birds are mature coniferous woodlands or mixed woodlands, especially ones containing spruce and hemlocks. It typically winters in tropical montane forests.

Blackburnian Warblers build a nest consisting of an open cup of twigs, bark, plant fibers, and rootlets held to branch with spider web and lined with lichens, moss, hair, and dead pine needles that’s placed near the end of a branch. 3-5 whitish eggs are laid its nest which is usually placed 2–38 m (5–80 feet) above the ground, on a horizontal branch.” (Wikipedia with editing)

Next Article – The Lost Mate

Blackburnian Warbler – All About Birds