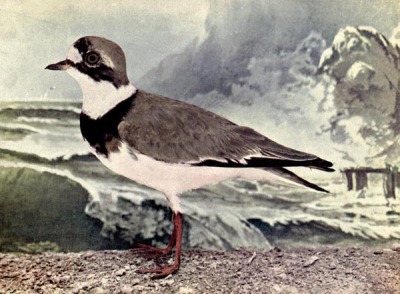 N THEIR habits the Plovers are usually active; they run and fly with equal facility, and though they rarely attempt to swim, are not altogether unsuccessful in that particular.

The Semi-palmated Ring Plover utters a plaintive whistle, and during the nesting season can produce a few connected pleasing notes. The three or four pear-shaped, variagated eggs are deposited in a slight hollow in the ground, in which a few blades of grass are occasionally placed. Both parents assist in rearing the young. Worms, small quadrupeds, and insects constitute their food. Their flesh is regarded as a delicacy, and they are therefore objects of great attraction to the sportsman, although they often render themselves extremely troublesome by uttering their shrill cry and thus warning their feathered companions of the approach of danger. From this habit they have received the name of “tell-tales.” Dr. Livingstone said of the African species: “A most plaguey sort of public spirited individual follows you everywhere, flying overhead, and is most persevering in his attempts to give fair warning to all animals within hearing to flee from the approach of danger.”

The American Ring Plover nests as far north as Labrador, and is common on our shores from August to October, after which it migrates southward. Some are stationary in the southern states. It is often called the Ring Plover, and has been supposed to be identical with the European Ringed Plover.

It is one of the commonest of shore birds. It is found along the beaches and easily identified by the complete neck ring, white upon dark and dark upon light. Like the Sandpipers the Plovers dance along the shore in rhythm with the wavelets, leaving sharp half-webbed footprints on the wet sand. Though usually found along the seashore, Samuels says that on their arrival in spring, small flocks follow the courses of large rivers, like the Connecticut. He also found a single pair building on Muskeget, the famous haunt of Gulls, off the shore of Massachusetts. It has been found near Chicago, Illinois, in July.

Plovers belong to a class of birds called Waders.

They spend the winters down south, and early in the spring begin their journey north. By the beginning of summer they are in the cold north, where they lay their eggs and hatch their young. Here they remain until about the month of August, when they begin to journey southward. It is on their way back that we see most of them.

While on their way north, they are in a hurry to reach their nesting places, so only stop here and there for food and rest.

Coming back with their families, we often see them in ploughed fields. Here they find insects and seeds to eat.

The Ring Plover is so called from the white ring around its neck.

These birds are not particular about their nests. They do not build comfortable nests as most birds do. They find a place that is sheltered from the north winds, and where the sun will reach them. Here they make a rude nest of the mosses lying around.

The eggs are somewhat pointed, and placed in the nest with the points toward the center. In this way the bird can more easily cover the eggs.

We find, among most birds, that after the nest is made, the mother bird thinks it her duty to hatch the young.

The father bird usually feeds her while she sits on the eggs. In some of the bird stories, you have read how the father and mother birds take turns in building the nest, sitting on the nest, and feeding the young.

Some father birds do all the work in building the nest, and take care of the birds when hatched.

Among plovers, the father bird usually hatches the young, and lets the wife do as she pleases.

After the young are hatched they help each other take care of them.

Plovers have long wings, and can fly very swiftly.

The distance between their summer and winter homes is sometimes very great.

Range—North America in general, breeding in the Arctic and sub-arctic districts, winters from the Gulf States to Brazil.

Nest—Depression in the ground, with lining of dry grass.

When I consider Your heavens, the work of Your fingers, The moon and the stars, which You have ordained, What is man that You are mindful of him, And the son of man that You visit him? For You have made him a little lower than the angels, And You have crowned him with glory and honor. You have made him to have dominion over the works of Your hands; You have put all things under his feet, All sheep and oxen— Even the beasts of the field, The birds of the air, And the fish of the sea That pass through the paths of the seas. O LORD, our Lord, How excellent is Your name in all the earth! (Psalms 8:3-9 NKJV)

The Semipalmated Plover (Charadrius semipalmatus) is a small plover. We see them here at our shores. Florida has lots of shoreline.
This species weighs  0.78–2.2 oz (22–63 g) and measures 5.5–7.9 in (14–20 cm) in length and 14–22 in (35–56 cm) across the wings. Adults have a grey-brown back and wings, a white belly, and a white breast with one black neckband. They have a brown cap, a white forehead, a black mask around the eyes and a short orange and black bill.

Their breeding habitat is open ground on beaches or flats across northern Canada and Alaska. They nest on the ground in an open area with little or no plant growth.
They are migratory and winter in coastal areas ranging from the United States to Patagonia. They are extremely rare vagrants to western Europe, although their true status may be obscured by the difficulty in identifying them from the very similar Ringed Plover of Eurasia, of which it was formerly considered a subspecies.
These birds forage for food on beaches, tidal flats and fields, usually by sight. They eat insects, crustaceans and worms.

This bird resembles the Killdeer but is much smaller and has only one band. The term “semipalmated” refers to its partly webbed feet. Like the Killdeer and since its nest is on the ground, it uses a “broken-wing” display to lure intruders away from the nest. (Wikipedia)

If a bird’s nest happens to be before you along the way, in any tree or on the ground, with young ones or eggs, with the mother sitting on the young or on the eggs, you shall not take the mother with the young; (Deuteronomy 22:6 NKJV)

Semipalmated Plovers belong to the Charadriidae – Plovers Family. There are 67 species that “are small to medium-sized birds with compact bodies, short, thick necks and long, usually pointed, wings, but most species of lapwing may have more rounded wings. Their bill are usually straight (except for the Wrybill) and short, their toes are short, hind toe could be reduced or absent, depending on species. Most Charadriidae also have relatively short tails, the Killdeer is the exception. In most genera, the sexes are similar, very little sexual dimorphism occurs between sexes. They range in size from the Collared Plover, at 26 grams and 14 cm (5.5 inches), to the Masked Lapwing, at 368 grams (13 oz) and 35 cm (14 inches)

Next Article – The Mallard Duck

Semipalmated Plover – All About Birds