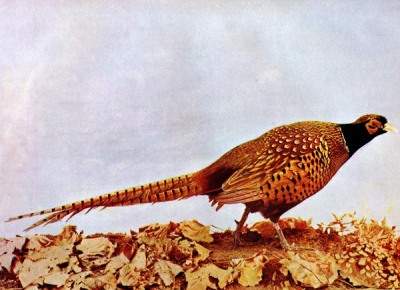 E are fortunate in being able to present our readers with a genuine specimen of the Ring-Necked species of this remarkable family of birds, as the Ring-Neck has been crossed with the Mongolian to such an extent, especially in many parts of the United States, that they are practically the same bird now. They are gradually taking the place of Prairie Chickens, which are becoming extinct. The hen will hatch but once each year, and then in the late spring. She will hatch a covey of from eighteen to twenty-two young birds from each setting. The bird likes a more open country than the quail, and nests only in the open fields, although it will spend much time roaming through timberland. Their disposition is much like that of the quail, and at the first sign of danger they will rush into hiding. They are handy and swift flyers and runners. In the western states they will take the place of the Prairie Chicken, and in Ohio will succeed the Quail and common Pheasant.

While they are hardy birds, it is said that the raising of Mongolian-English Ring-Necked Pheasants is no easy task. The hens do not make regular nests, but lay their eggs on the ground of the coops, where they are picked up and placed in a patent box, which turns the eggs over daily. After the breeding season the male birds are turned into large parks until February.

The experiment which is now being made in Ohio—if it can be properly so termed, thousands of birds having been liberated and begun to increase—has excited wide-spread interest. A few years ago the Ohio Fish and Game Commission, after hearing of the great success of Judge Denny, of Portland, Oregon, in rearing these birds in that state, decided it would be time and money well spent if they should devote their attention and an “appropriation” to breeding and rearing these attractive game birds. And the citizens of that state are taking proper measures to see that they are protected. Recently more than two thousand Pheasants were shipped to various counties of the state, where the natural conditions are favorable, and where the commission has the assurance that the public will organize for the purpose of protecting the Pheasants. A law has been enacted forbidding the killing of the birds until November 15, 1900. Two hundred pairs liberated last year increased to over two thousand. When not molested the increase is rapid. If the same degree of success is met with between now and 1900, with the strict enforcement of the game laws, Ohio will be well stocked with Pheasants in a few years. They will prove a great benefit to the farmers, and will more than recompense them for the little grain they may take from the fields in destroying bugs and insects that are now agents of destruction to the growing crops.

Such of our readers as appreciate the beauty and quality of this superb specimen will no doubt wish to have it framed for the embellishment of the dining room.

Range—Throughout China; have been introduced into England and the United States.

Nest—On the ground under bushes.

Eggs—Vary, from thirteen to twenty.

“As a partridge that broods but does not hatch, So is he who gets riches, but not by right; It will leave him in the midst of his days, And at his end he will be a fool.” (Jer 17:11 NKJV)

What a lovely creation from the Creator. The male is especially beautiful and brightly feathered. The Common Pheasant is in the Phasianidae – Pheasants, Fowl & Allies. Family which currently has 182 species. Partridges are also part of the family and are closely related.

It is native to Asia and has been widely introduced elsewhere as a game bird. In parts of its range, namely in places where none of its relatives occur such as in Europe (where it is naturalized), it is simply known as the “pheasant”. Ring-necked Pheasant is both the name used for the species as a whole in North America and also the collective name for a number of subspecies and their intergrades which have white neck rings.

It is a well-known gamebird, among those of more than regional importance perhaps the most widespread and ancient one in the whole world. The Common Pheasant is one of the world’s most hunted birds; it has been introduced for that purpose to many regions, and is also common on game farms where it is commercially bred. Ring-necked Pheasants in particular are commonly bred and were introduced to many parts of the world; the game farm stock, though no distinct breeds have been developed yet, can be considered semi-domesticated. The Ring-necked Pheasant is the state bird of South Dakota, one of only three U.S. state birds that is not a species native to the United States.

There are many colour forms of the male Common Pheasant, ranging in colour from nearly white to almost black in some melanistic examples. These are due to captive breeding and hybridization between subspecies and with the Green Pheasant, reinforced by continual releases of stock from varying sources to the wild.

The adult male Common Pheasant of the nominate subspecies Phasianus colchicus colchicus is 24–35 in. in length with a long brown streaked black tail, accounting for almost 20 in. of the total length. The body plumage is barred bright gold and brown plumage with green, purple and white markings. The head is bottle green with a small crest and distinctive red wattle. P. c. colchicus and some other races lack a white neck ring.

The female (hen) is much less showy, with a duller mottled brown plumage all over and measuring 20–25 in. long including a tail of around 8 in. Juvenile birds have the appearance of the female with a shorter tail until young males begin to grow characteristic bright feathers on the breast, head and back at about 10 weeks after hatching.

In the USA, Common Pheasants are widely known as “Ring-necked Pheasants“. More colloquial North American names include “chinks” or, in Montana, “phezzens“. In China, meanwhile, the species is properly called zhi ji (雉鸡) – “pheasant-fowl” –, essentially implying the same as the English name “Common Pheasant”. Like elsewhere, P. colchicus is such a familiar bird in China that it is usually just referred to as shan ji (山雞), “mountain chicken”, a Chinese term for pheasants in general.

There are about 30 subspecies in five (sometimes six) groups. These can be identified according to the male plumage, namely presence or absence of a white neck-ring and the color of the uppertail (rump) and wing coverts.

Common Pheasants feed solely on the ground but roost in sheltered trees at night. They eat a wide variety of animal and vegetable type-food, like fruit, seeds and leaves as well as a wide range of invertebrates, with small vertebrates like snakes, lizards, small mammals, and birds occasionally taken. 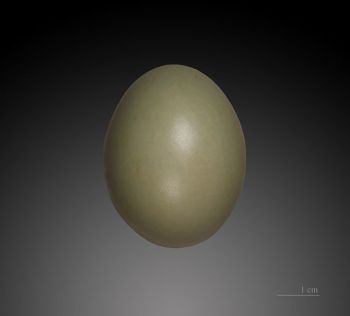 The males are often accompanied by a harem of several females. Common Pheasants nest on the ground, producing a clutch of around ten eggs over a two-three week period in April to June. The incubation period is about 23–26 days. The chicks stay near the hen for several weeks after hatching but grow quickly, resembling adults by only 15 weeks of age.

Two links, one to a photo and the other to information that I do not like, but it happens:

One remark to these is that Our Heavenly Father knows when they fall.

… And yet not one of them will fall to the ground without your Father’s leave (consent) and notice. (Mat 10:29 AMP)

My other remark is that, like the Partridge, they are “Clean” birds and are allowed to be eaten. I can handle that, but those that only hunt them for a plaque on their wall or feathers for a hat, for me, it is sad.

Now therefore, let not my blood fall to the earth away from the presence of the LORD, for the king of Israel has come out to seek a single flea like one who hunts a partridge in the mountains. (1Sa 26:20 ESV)

The Previous Article – The Bronzed Grackle

Ring-necked Pheasant – All About Birds

Birds of the Bible – Partridge