N John Burroughs’ “Birds and Poets” this master singer is described as the most melodious of our songsters, with the exception of the Wood Thrush, a bird whose strains, more than any other’s, express harmony and serenity, and he complains that no merited poetic monument has yet been reared to it. But there can be no good reason for complaining of the absence of appreciative prose concerning the Hermit. One writer says: “How pleasantly his notes greet the ear amid the shrieking of the wind and the driving snow, or when in a calm and lucid interval of genial weather we hear him sing, if possible, more richly than before. His song reminds us of a coming season when the now dreary landscape will be clothed in a blooming garb befitting the vernal year—of the song of the Blackbird and Lark, and hosts of other tuneful throats which usher in that lovely season. Should you disturb him when singing he usually drops down and awaits your departure, though sometimes he merely retires to a neighboring tree and warbles as sweetly as before.”

In “Birdcraft” Mrs. Wright tells us, better than any one else, the story of the Hermit. She says: “This spring, the first week in May, when standing at the window about six o’clock in the morning, I heard an unusual note, and listened, thinking it at first a Wood Thrush and then a Thrasher, but soon finding that it was neither of these I opened the window softly and looked among the near by shrubs, with my glass. The wonderful melody ascended gradually in the scale as it progressed, now trilling, now legato, the most perfect, exalted, unrestrained, yet withal, finished bird song that I ever heard. At the first note I caught sight of the singer perching among the lower sprays of a dogwood tree. I could see him perfectly: it was the Hermit Thrush. In a moment he began again. I have never heard the Nightingale, but those who have say that it is the surroundings and its continuous night singing that make it even the equal of our Hermit; for, while the Nightingales sing in numbers in the moonlit groves, the Hermit tunes his lute sometimes in inaccessible solitudes, and there is something immaterial and immortal about the song.”

The Hermit Thrush is comparatively common in the northeast, and in Pennsylvania it is, with the exception of the Robin, the commonest of the Thrushes. In the eastern, as in many of the middle states, it is only a migrant. It is usually regarded as a shy bird. It is a species of more general distribution than any of the small Thrushes, being found entirely across the continent and north to the Arctic regions. It is not quite the same bird, however, in all parts of its range, the Rocky Mountain region being occupied by a larger, grayer race, while on the Pacific coast a dwarf race takes its place. It is known in parts of New England as the “Ground Swamp Robin,” and in other localities as “Swamp Angel.”

True lovers of nature find a certain spiritual satisfaction in the song of this bird. “In the evening twilight of a June day,” says one of these, “when all nature seemed resting in quiet, the liquid, melting, lingering notes of the solitary bird would steal out upon the air and move us strangely. What was the feeling it awoke in our hearts? Was it sorrow or joy, fear or hope, memory or expectation? And while we listened, we thought the meaning of it all was coming; it was trembling on the air, and in an instant it would reach us. Then it faded, it was gone, and we could not even remember what it had been.” 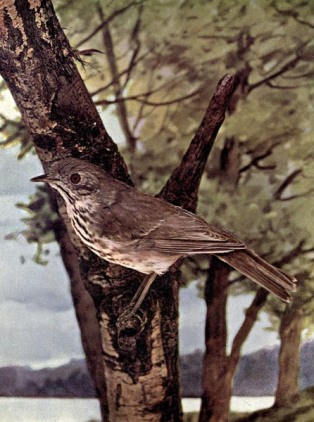 The Hermit Thrush for Birds Illustrated by Color Photography, 1897

I am sorry, children, that I cannot give you a specimen of my song as an introduction to the short story of my life. One writer about my family says it is like this: “O spheral, spheral! O holy, holy! O clear away, clear away! O clear up, clear up!” as if I were talking to the weather. May be my notes do sound something like that, but I prefer you should hear me sing when I am alone in the woods, and other birds are silent. It is ever being said of me that I am as fine a singer as the English Nightingale. I wish I could hear this rival of mine, and while I have no doubt his voice is a sweet one, and I am not too vain of my own, I should like to “compare notes” with him. Why do not some of you children ask your parents to invite a few pairs of Nightingales to come and settle here? They would like our climate, and would, I am sure, be welcomed by all the birds with a warmth not accorded the English Sparrow, who has taken possession and, in spite of my love for secret hiding places, will not let even me alone.

When you are older, children, you can read all about me in another part of Birds. I will merely tell you here that I live with you only from May to October, coming and going away in company with the other Thrushes, though I keep pretty well to myself while here, and while building my nest and bringing up my little ones I hide myself from the face of man, although I do not fear his presence. That is why I am called the Hermit.

If you wish to know in what way I am unlike my cousin Thrushes in appearance, turn to pages Brown Thrush and Wood Thrush, Vol. 1, of Birds. There you will see their pictures. I am one of the smallest of the family, too. Some call me “the brown bird with the rusty tail,” and other names have been fitted to me, as Ground Gleaner, Tree Trapper, and Seed Sower. But I do not like nicknames, and am just plain,

Nest—On the ground, in some low, secluded spot, beneath shelter of deep shrubbery. Bulky and loosely made of leaves, bark, grasses, mosses, lined with similar finer material. 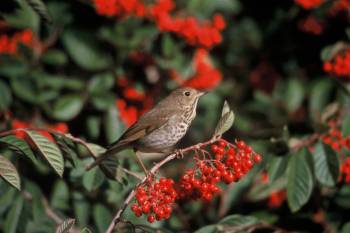 I know all the birds of the mountains, And the wild beasts of the field are Mine. (Psa 50:11)

The Hermit Thrush’s song is ethereal and flute-like, consisting of a beginning note, then several descending musical phrases in a minor key, repeated at different pitches. They often sing from a high open location.

The Hermit Thrush is one of 185 species in the Turdidae – Thrushes Family.

Sorr, this is a little short, but I am away checking out the birds.

Next Article – The Song Sparrow

The Previous Article – The Yellow Warbler

Hermit Thrush – All About Birds