HE Vireos are a family of singers and are more often heard than seen, but the Warbler has a much more musical voice, and of greater compass than any other member of the family. The song ripples like a brook, floating down from the leafiest tree-tops. It is not much to look at, being quite plainly dressed in contrast with the red-eyed cousin, the largest of the Vireos. In nesting time it prefers seclusion, though in the spring and mid-summer, when the little ones have flown, and nesting cares have ceased, it frequents the garden, singing in the elms and birches, and other tall trees. It rambles as well through the foliage of trees in open woodland, in parks, and in those along the banks of streams, where it diligently searches the under side of leaves and branches for insect life, “in that near-sighted way peculiar to the tribe.” It is a very stoic among birds, and seems never surprised at anything, “even at the loud report of a gun, with the shot rattling about it in the branches, and, if uninjured, it will stand for a moment unconcerned, or move along, peering on every side amongst the foliage, warbling its tender, liquid strains.”

The nest of this species is like that of the Red-eyed Vireo—a strong, durable, basket-like fabric, made of bark strips, lined with fine grasses. It is suspended by the brim in slender, horizontal forks of branches, at a great height from the ground.

The Vireo is especially numerous among the elms of Boston Common, where at almost any hour of the day, from early in the month of May, until long after summer has gone, may be heard the prolonged notes of the Warbling species, which was an especial favorite of Dr. Thomas M. Brewer, author of “History of North American Birds.” Its voice is not powerful, but its melody, it is said, is flute-like and tender, and its song is perhaps characterized more by its air of happy contentment, than by any other special quality. No writer on birds has grown enthusiastic on the subject, and Bradford Torrey alone among them does it scant justice, when he says this Vireo “is admirably named; there is no one of our birds that can more properly be said to warble. He keeps further from the ground than the others, and shows a strong preference for the elms of village streets, out of which his delicious music drops upon the ears of all passers underneath. How many of them hear it and thank the singer, is unhappily another question.”

Range—North America; breeds as far north as the Hudson Bay region; winters in the tropics.

Nest—Pensile, of grasses and plant fibres, firmly and smoothly interwoven, lined with fine grasses, suspended from a forked branch eight to forty feet up.

Eggs—Three or four, white, with a few specks or spots of black umber, or rufous-brown, chiefly about the larger end. 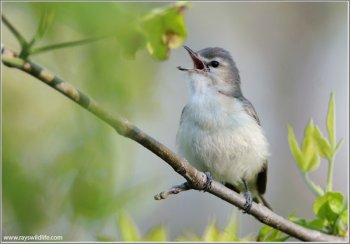 A merry heart doeth good like a medicine: but a broken spirit drieth the bones. (Proverbs 17:22 KJV)

A rejoicing heart doth good to the body, And a smitten spirit drieth the bone. (Proverbs 17:22 YLT)

The birds of heaven dwell by them; they give forth their voice from among the branches. (Psalms 104:12 Darby)

Another one of the Lord’s little beauties that loves to sing. The Vireos are in the Vireonidae – Vireos, Greenlets Family.

The Warbling Vireo (Vireo gilvus) is a small North American songbird. Adults are 4.7 in (12 cm) long and weigh 0.4 oz (12 g). They are mainly olive-grey on the head and upperparts with white underparts; they have brown eyes and the front of the face is light. There is a white supercilium. They have thick blue-grey legs and a stout bill. Western birds are generally smaller and have darker grey crowns.

Its breeding habitat is open deciduous and mixed woods from Alaska to Mexico and the Florida Panhandle. It often nests along streams. It migrates to Mexico and Central America. The female quivers wings, oft in response to courtship song of the male, who likes to strut around the female with wings and tail spread. 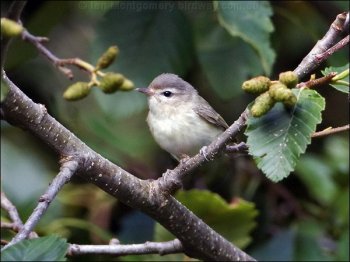 They forage for insects in trees, hopping along branches and sometimes hovering. They also eat berries, especially before migration and in winter quarters, where they are – like other vireos – apparently quite fond of Gumbo-limbo seeds, though they will not venture into human-modified habitat to get them.

They make a deep cup nest (photo) suspended from a tree branch or shrub, placed relatively high in the east and lower in the west. The male helps with incubation and may sing from the nest.

Their song is a cheerful warble, similar to that of the Painted Bunting. There are subtle differences in song between eastern and western birds, at least where the ranges meet in Alberta. Some authorities split the eastern and western races of this species into separate species:

The Eastern Warbling Vireo, V. gilvus, breeds from central Alberta and northern Montana east and south through most of the United States and parts of southern Canada, outside the range of the previous group. It winters south of the Isthmus of Tehuantepec from south-central Chiapas to Nicaragua. It completes its autumn molt on the breeding grounds, while the swainsonii group completes it after leaving.

(Wikipedia and other internet sources)
*

Next Article – The Wood Pewee

The Previous Article – The Yellow-Bellied Sapsucker