DAINTY little creature indeed is the Yellow-headed Bush Tit, or Verdin, being smaller than the largest North American Humming Bird, which inhabits southern Arizona and southward. It is a common bird in suitable localities throughout the arid regions of Northern Mexico, the southern portions of Texas, Arizona, New Mexico, and in Lower California. In spite of its diminutive size it builds a remarkable structure for a nest—large and bulky, and a marvel of bird architecture. Davie says it is comparatively easy to find, being built near the ends of the branches of some low, thorny tree or shrub, and in the numerous varieties of cacti and thorny bushes which grow in the regions of its home.

The nest is globular, flask-shaped or retort shape in form, the outside being one mass of thorny twigs and stems interwoven, while the middle is composed of flower-stems and the lining is of feathers. The entrance is a small circular opening. Mr. Atwater says that the birds occupy the nests during the winter months. They are generally found nesting in the high, dry parts of the country, away from tall timber, where the thorns are the thickest. From three to six eggs are laid, of a bluish or greenish-white or pale blue, speckled, chiefly round the larger end, with reddish brown.

“The woods were made for the hunters of dreams,
The brooks for the fishers of song.
To the hunters who hunt for the gunless game
The woods and the streams belong.
There are thoughts that moan from the soul of the pine,
And thoughts in the flower-bell curled,
And the thoughts that are blown from the scent of the fern
Are as new and as old as the world.”

Range—Northern regions of Mexico and contiguous portions of the United States, from southern Texas to Arizona and Lower California.

Nest—Globular, the outside being one mass of thorny twigs and stems interwoven, and lined with feathers.

Eggs—Three to six, of a bluish or greenish white color, speckled with reddish brown.

but when it is sown, it grows up and becomes greater than all herbs, and shoots out large branches, so that the birds of the air may nest under its shade.” (Mar 4:32 NKJV)

The Verdin is a very small bird. At 4.5 inches in length, it rivals the American Bushtit as one of the smallest passerines in North America. It is gray overall, and adults have a bright yellow head and rufous “shoulder patch” (the lesser coverts). Unlike the tits, it has a sharply pointed bill.

Verdins are insectivorous, continuously foraging among the desert trees and scrubs. They are usually solitary except when they pair up to construct their conspicuous nests. Verdins occasionally try to obtain tidbits of dried sugar-water from hummingbird feeders.

Verdins are permanent residents of the southwestern United States and northern Mexico, ranging from southeastern California to Texas, throughout Baja California and into central Mexico, north of the Trans-Mexican Volcanic Belt.

The common name of the family reflects the tendency of most species to construct elaborate pear-shaped nests. These nests are woven from spiderweb, wool and animal hair and soft plant materials and is suspended from twigs and branches in trees. The nests of the African genus Anthoscopus are even more elaborate than the Eurasian Remiz, incorporating a false entrance above the true entrance which leads to a false chamber. The true nesting chamber is accessed by the parent opening a hidden flap, entering and then closing the flap shut again, the two sides sealing with sticky spider webs.

Verdins are known to build two types of nest; one for raising chicks and one for the winter, which has thicker insulation. A nest built in the summer has the opening toward the prevailing winds.

Following are a series of photos showing Verdins working on their nests. (From Verdin and Nest Photographs and Sound Recording @Earle Robinson) 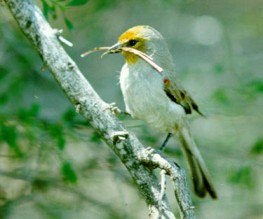 (Wikipedia and other internet sources)

Next Article – The Bronzed Grackle

The Previous Article – The American Flamingo