and the red kite, the falcon, and the kite in their kinds, (Deuteronomy 14:13 NASB)

In the Birds of the Bible – Hidden Covenant Part 3, I mistakenly placed this photo of a Swallow-tailed Kite instead of a Swallow. I have since fixed my mistake. A J was talking about the Swallows observing the time of their coming and he used Jeremiah 8:7.

Even the stork in the heavens Knows her appointed times; And the turtledove, the swift, and the swallow Observe the time of their coming. But My people do not know the judgment of the LORD. (Jeremiah 8:7 NKJV)

The reason I mixed them up is because right now, in this area, the Swallow-tailed Kites are being spotted. I have seen a single one three times and just the other day, Dan and I had two of them skim over the top of trees, right in front of us. They have been in the area for a month or so, and soon they will move on again. They “Observe the time of their coming.” Thus the mistake on my part.

They may be one of the Birds of Prey, but they were beautifully created by the Lord. They are so graceful and enjoyable to watch. I am always amazed at the Creator’s use of such variety in the birds and in all the other neat things around us.

God created the great sea monsters and every living creature that moves, which the waters brought forth abundantly, according to their kinds, and every winged bird according to its kind. And God saw that it was good (suitable, admirable) and He approved it. (Genesis 1:21 AMP)

According to the Audubon WatchList, “Two subspecies found in the Americas. Northern subspecies (Elanoides forficatus forficatus) breeds in small sections of seven southeastern U.S. states and in southern Mexico. Members of this group migrate to South America in the late summer. Southern subspecies (Elanoides forficatus yetapa) found through much of South America. The estimated U.S. population of approximately 10,000 birds now breeds in fragmented populations from South Carolina south to Florida and west to Louisiana/Texas border with largest known populations in northern Florida. Formerly bred north to Minnesota and west through Texas to Mexico. Significant populations remain in Florida and along the Pascagoula River in Mississippi.”

I really enjoy seeing these Kites because you just have to be looking in the right direction at the right time. Every time they have been spotted by us, they just sort of “appear” over the tops of the trees. They skim so low, that when they come over you, you either see them or you don’t.

Kites are of course one of our Bible Birds – (Glede and Kites). They are mentioned twice in Scripture in the list of “unclean” birds in Leviticus 11:14 and Deuteronomy 14:13. Each time “after its kind” is given. So, our Swallow-tailed Kite is one of those kinds and would like to introduce you to this amazing bird that is so neat to watch flying. When they spread that tail of theirs, it is just super neat. 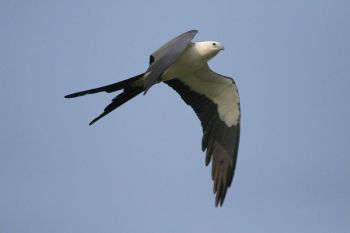 The Swallow-tailed Kite is a member of the Accipitridae Family (Kites, Hawks & Eagles) Family in the Order Accipitriformes. They are considered Abundance Common according the Thayer Birding software.

They are 24 inches (60 cm) with a very long black forked tail, white head, chest, belly and leading portion of underwing. Their flight feathers are black and their back is also black.

They are a medium-sized, graceful, long-winged, long-tailed hawk with pointed wings, a short, dark, hooked bill. The males and females are similar.

Adults have a long, deeply forked tail. white head, neck, chest, underwing coverts, belly, and undertail coverts, a slate gray back and upperwings, black tail and flight feathers. Whereas the immature is duller than adult with fine streaks on head and breast and has a shorter, less deeply-forked tail than adult.

Thayer also says of their habitat and behavior – ” Wet open woodlands, bottomlands, wooded river swamps, marshes, wetlands, and along rivers, ponds and lakes. Agile and graceful in flight. Eats in flight by bending head and neck under body to eat prey held in talon. Will drink in flight, much like a swallow. Gregarious. Will sweep low over open fields and grasslands to catch food or soar very high for flying insects.” 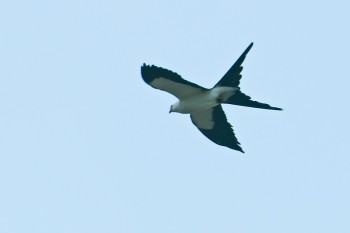 The nest is usually in treetop concealed by thick foliage and they place it on a foundation of preceding year’s nest. It consist of sticks, twigs, moss, pine needles, leaves, lichen. Lined with fine materials, few feathers. Both sexes help with nest construction.

The spend their winters from Colombia and Venezuela S. Marsh drainage, deforestation, and shooting are responsible for reduction in population and range.

Miscellaneous notes; Occasionally nest in loose colonies of a few pairs. Bathe and drink by skimming water surface like swallow. Occasionally soar at great heights. Up to 200 pieces used in nest, carried individually, may require up to 800 miles of flight. Formerly known as American Swallow-tailed Kite; changed by AOU in 1996.

From Thayer Birding Software, The Birder’s Handbook, Wikipedia, and other internet sources.