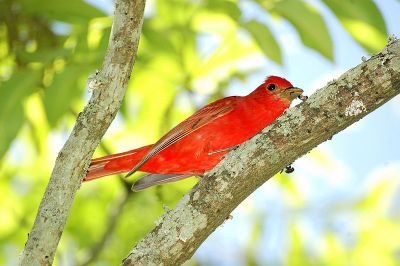 HE TANAGERS are birds of such uncommon beauty that when we have taken the pictures of the entire family the group will be a notable one and will add attractiveness to the portfolio. [See Vol. I, Red-Rumped Tanager and Scarlet Tanager] This specimen is also called the Summer Red-bird or Rose Tanager, and is found pretty generally distributed over the United States during the summer months, wintering in Cuba, Central America, and northern South America. As will be seen, the adult male is a plain vermilion red. The plumage of the female is less attractive. In habits this species resembles the Scarlet Tanager, perhaps the most brilliant of the group, but is not so retiring, frequenting open groves and often visiting towns and cities.

The nesting season of this charming bird extends to the latter part of July, but varies with the latitude and season. Bark strips and leaves interwoven with various vegetable substances compose the nest, which is usually built on a horizontal or drooping branch, near its extremity and situated at the edge of a grove near the roadside. Davie says: “All the nests of this species which I have seen collected in Ohio are very thin and frail structures; so thin that the eggs may often be seen from beneath. A nest sent me from Lee county, Texas, is compactly built of a cottony weed, a few stems of Spanish moss, and lined with fine grass stems.” Mr. L. O. Pindar states that nests found in Kentucky are compactly built, but not very thickly lined. The eggs are beautiful, being a bright, light emerald green, spotted, dotted, and blotched with various shades of lilac, brownish-purple, and dark brown.

Chapman says the Summer Tanager may be easily identified, not alone by its color but by its unique call-note, a clearly enunciated chicky, tucky, tuck. Its song bears a general resemblance to that of the Scarlet, but to some ears is much sweeter, better sustained, and more musical. It equals in strength, according to one authority, that of the Robin, but is uttered more hurriedly, is more “wiry,” and much more continued.

The Summer Tanager is to a greater or less extent known to farmers as the Red Bee-Bird. Its food consists largely of hornets, wasps, and bees.

The male of this species requires several years to attain the full plumage. Immature individuals, it is said, show a mixture of red and yellow in relative proportions according to age. The female has more red than the male, but the tint is peculiar, a dull Chinese orange, instead of a pure rosy vermilion, as in the male.

An interesting study for many of our readers during the summer months when the Tanagers are gay in their full plumage, would be to seek out, with Birds in hand, the most attractive denizens of the groves, identifying and observing them in their haunts until the entire group, of which five species are represented in the United States, is made familiar. When we remember that there are about three hundred and eighty known species of Tanagers in Tropical America, it would seem a light task to acquaint oneself with the small family at home.

Eggs—Three or four, bluish-white or greenish-blue, with cinnamon or olive-brown markings. 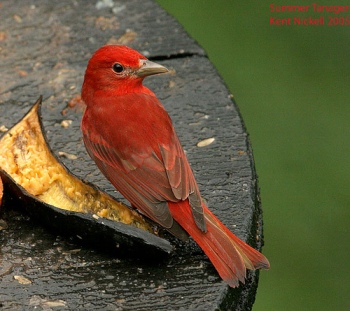 Now learn a parable of the fig tree; When her branch is yet tender, and putteth forth leaves, ye know that summer is near: (Mark 13:28 KJV)

Thou hast set all the borders of the earth: thou hast made summer and winter. (Psalms 74:17 KJV)

Their breeding habitat is open wooded areas, especially with oaks, across the southern United States, extending as far north as Iowa. These birds migrate to Mexico, Central America and northern South America. This tanager is an extremely rare vagrant to western Europe. 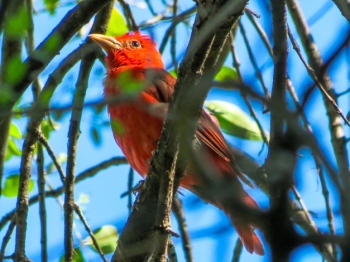 Adults have stout pointed bills and measure 17 cm (6.7 in) in length and 29 g (1.0 oz) in weight. Adult males are rose red and similar in appearance to the Hepatic Tanager, although the latter has a dark bill; females are orangish on the underparts and olive on top, with olive-brown wings and tail. As with all other birds, all red and orange colorations are acquired through their diet.

These birds are often out of sight, foraging high in trees, sometimes flying out to catch insects in flight. They mainly eat insects, especially bees and wasps, and berries. Fruit of Cymbopetalum mayanum (Annonaceae) are an especially well-liked food in their winter quarters, and birds will forage in human-altered habitat. Consequently, these trees can be planted to entice them to residential areas, and they may well be attracted to bird feeders. Summer Tanagers build a cup nest on a horizontal tree branch.

The Summer Tanager has an American Robin-like song, similar enough that novices sometimes mistake this bird for that species. The song consists of melodic units, repeated in a constant stream. The Summer Tanager’s song, however, is much more monotonous than that of T. migratorius, often consisting of as few as 3 or 4 distinct units. It is clearer and less nasal than the song of the Scarlet Tanager.

(From Wikipedia with editing and xeno-canto)

Next Article – The American White-Fronted Goose