While we were at the Cincinnati Zoo, we were able to see and photograph several Bat species. They were really cool and I wanted to share them with you. 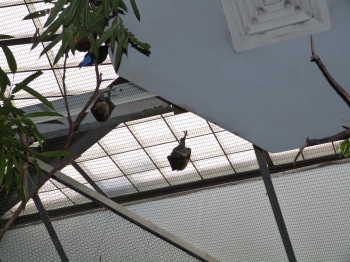 Then I remembered that I had written about them in Birds of the Bible – The Bat?, in 2010. That article was about the controversy over whether a Bat is a Bird. This time, I am mainly sharing the photos of the Bats that are there at the Zoo and comments about them. Just one personal observation about the above verses. The use of “fowl” in the King James Version and some of the others seems to refer to any creature that had wings and flies. I quoted the whole context because; 1) The verse and chapter separations were inserted later, 2) Birds, bats, and insects all seem to be referred to with the same collective term, “fowl.” I do not have a problem with the bat. It is not a bird.

The only other verses using “bat” or “bats” are:

And the stork, and the heron after her kind, and the lapwing, and the bat. (Deuteronomy 14:18 KJV)

In that day a man shall cast his idols of silver, and his idols of gold, which they made each one for himself to worship, to the moles and to the bats; (Isaiah 2:20 KJV)

The bats we saw at the Cincinnati Zoo were the Giant Fruit Bats and the Vampire Bats. They are amazing creatures of design and creation from their Creator, the Lord.

Giant Fruit Bat (Pteropus giganteus) or Indian Flying Fox is found in Bangladesh, China, India, the Maldives, Nepal, Pakistan, and Sri Lanka. Also known as the greater Indian fruit bat, it lives in mainly forests. It is a very large bat with a wingspan between 3 ft 10 in and 4 ft 10 in (1.2 and 1.5 m). It is nocturnal and feeds mainly on ripe fruits, such as mangoes and bananas, and nectar. This bat is gregarious and lives in colonies which can number a few hundred. Their offspring have no specific name besides ‘young’. They have one to two young.

The Indian flying fox lives in tropical forests and swamps, where a large body of water is nearby.

The way they were hanging up there amazed me. I zoomed in and took a photo of its foot. Also, they almost looked like a large cocoon hanging up there with the wings wrapper around them. The first photo, Dan caught one of them stretching. 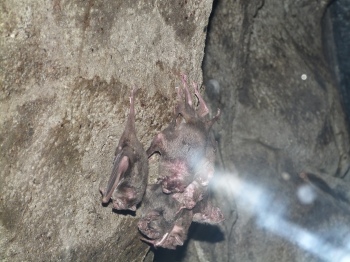 (Common) Vampire Bat (Desmodus rotundus) – The common vampire bat mainly feeds on the blood of livestock, approaching its prey at night while they are sleeping. It uses its razor-sharp teeth to cut open the skin of its hosts and laps up their blood with its long tongue. They are native to the New World, ranging from Mexico to Brazil, Chile, and Argentina.

The common vampire bat is short-haired, with silver-gray fur on its undersides, sharply separated from the darker fur on its back. It has small, somewhat rounded ears, a deeply grooved lower lip, and a flat, leaf-shaped nose. A well-developed, clawed thumb on each wing is used to climb onto prey and to assist the animal in take-off. The bat averages about 3.5 in (9 cm) long with a wingspan of 7 in (18 cm). It commonly weighs about 2 oz (57 grams), but its weight can double after a single feeding. The braincase is relatively large, but the snout is reduced to accommodate large incisors and canines. It has the fewest teeth among bats. 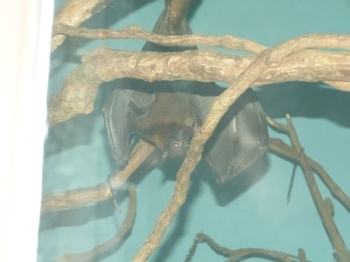 Common vampire bats have good eyesight. They are able to distinguish different optical patterns and may use vision for long-range orientation. These bats also have well-developed senses of smell and hearing: the cochlea (ear) is highly sensitive to low-frequency sounds, and the nasal passages are relatively large. They emit echolocation signals orally, and thus fly with their mouths open for navigation.

Birds of the Bible – The Bat?