Magnificent Frigatebird over shore by Patrick AFB by Lee

“The birds of the air, And the fish of the sea That pass through the paths of the seas. O LORD, our Lord, How excellent is Your name in all the earth!” (Psalms 8:8-9 NKJV)

Today while trying to enter Patrick AFB in Florida, we spotted three Magnificent Frigatebirds skimming over the edge of the Atlantic Ocean. Wow!! We very seldom spot these birds. The size of their wingspan is amazing and are a sight to see.

Since this was New Year’s Eve day, we discovered that the A1A entrance was closed. So, we had to turn around and go back to the other gate. 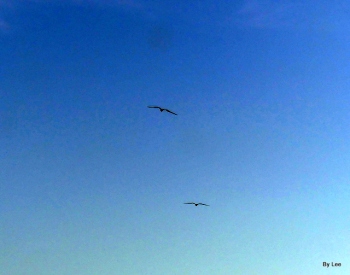 Two Magnificent Frigatebird over shore by Patrick AFB by Lee

“Dan, wait while I get my camera out of the case. Maybe, we can spot them again, because they were heading south originally while we were going north.” Yeah! We spotted the three and also a fourth one. These photos were taken through the front windshield while Dan was driving. So, they are less than perfect. But, it does prove we saw them.

Magnificent Frigatebird over shore by Patrick AFB by Lee

I have a Dr. appointment over here, so we came a day or so early. We birdwatched a Viera Wetlands a bit on the way into the area. Plan on covering more of the wetlands before heading back home.

Now for some better photos of this magnificent Magnificent Frigatebird.

While checking for information on these birds, I found several interesting articles you might want to check out. The one talks about how they stay at sea for days and weeks on end. They tested their sleeping ability to sleep while aloft. See: Frigatebirds can sleep while flying.

“The 7-foot wingspan of a magnificent frigatebird is unmistakable. They dwarf other birds as they glide on air currents above coastal Florida. Our state hosts the largest frigatebird species and the only nesting colony in the United States, located in the Dry Tortugas. Their summer breeding season brings the open-ocean species in to the shore where males can show off their distinctive red pouch to potential mates.

Frigatebirds rarely land on the ground due to their short legs and wing shape. Their thin “bent elbow” wings are ideal for soaring hundreds of miles without a single wing flap, but can’t generate enough lift to get the large birds off of the ground. They land and nest in high places, free diving off of them before catching the breeze and flying on.

It’s just as uncommon to find a frigatebird on the water. Their feathers lack oil that keep their seafaring neighbors like pelicans and gulls afloat. Water would quickly soak the frigate’s feathers and make it nearly impossible to escape.” This is from Nature’s Academy’s article.

We have had several articles here over the years about the Frigatebirds:

“F” is for Flamingos and Frigatebirds: “F” Birds, Part 1