Today’s Peanut’s cartoon reminds me of the birds we saw at the Jacksonville Zoo recently. It had rained before and it rained while we were visiting.

“Poor Woodstock.. When he gets wet, he looks like an English Sheep-Bird!” [In case you can’t read it]

“Who does great things, and unsearchable, Marvelous things without number. He gives rain on the earth, And sends waters on the fields.” (Job 5:9-10 NKJV)

In Where Am I Found? – Abdim’s Stork, the first photo showed the stork still wet. Dan just showed me his photo of the Stork, which definitely shows a wet bird hairdo. 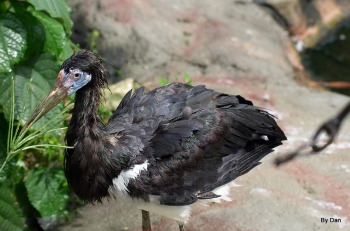 My photo of this wet Ibis: 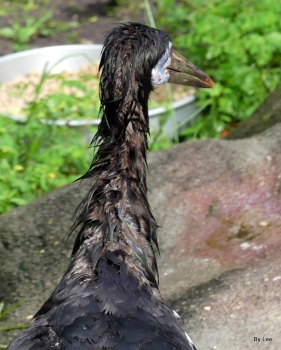 There were a few others that were not up to their normally sleek appearance.

Another wet avian wonder was the Yellow-billed Stork. He was damp, but not as wet as the Abdim’s Stork.

Are you taking a picture of me like this when I am not preened?

This is why you see so many birds preening. The Roseate Spoonbill was busy straightening and drying its feathers.

“Who covers the heavens with clouds, Who prepares rain for the earth, Who makes grass to grow on the mountains. He gives to the beast its food, And to the young ravens that cry.” (Psalms 147:8-9 NKJV)

There were a few others that were not up to their normally sleek appearance.

Where Am I Found? – Abdim’s Stork

Some of the Other Jacksonville Zoo articles:

Birdwatching at the Jacksonville Zoo by Dan’s Pix

“And I set my heart to seek and search out by wisdom concerning all that is done under heaven;” (Ecclesiastes 1:13a NKJV)

The next amazing Avian Wonder from the Creator was the Wrinkled Hornbill (Aceros corrugatus). I found these at the zoo. Did you answer those questions?

At the Jacksonville Zoo, October 8th, we watched a rain soaked Abdim’s Stork (Ciconia abdimii), also known as a White-bellied Stork. He, along with his zoo friends, had endured a rainstorm before we arrived. He was also rained on, along with us, later. Not one of my favorite zoo visits, but we always enjoy seeing God’s Avian Creations, whether they are wet or dry.

If you wanted to watch an Abdim’s Stork, where would you go? Yes, you can find them at the Jacksonville Zoo in Melbourne, Florida. But those storks are captive.

Where are Wrinkled Hornbills found in the wild? Clue: you would need to travel to an area that gets lots of rain.

“The Abdim’s stork (Ciconia abdimii), also known as white-bellied stork, is a black stork with grey legs, ??? knees and feet, grey bill and white underparts. It has red facial skin in front of the eye and blue skin near the bill in breeding season. It is the smallest species of stork, at 73 cm (29 in) and a weight of just over 1 kg (2.2 lbs). The female lays two to three eggs and is slightly smaller than the male.

The Abdim’s stork is found in open habitats throughout ????. Its diet consists mainly of ???, ??? and other large insects, although the birds will also eat small ???????. The Abdim’s stork has escaped or been deliberately released in to Florida, USA, but there is no evidence that the population is breeding and may only persist due to continuing releases or escapes.” Abdin’s Stork – Wikipedia

So where is ?????? Your challenge is to find out by searching.

“With all my wisdom I tried to understand everything that happens here on earth. And God has made this so hard for us humans to do.” (Ecclesiastes 1:13 CEV)

I still think this verse is telling us that, God the Creator, just wants us to make an effort. Yes, it takes a little effort, but when you find the answers, your understanding has just been increased.

Also can you answer these questions?